Samsung QLED vs. LG OLED: How the two best TV technologies compare in 2020 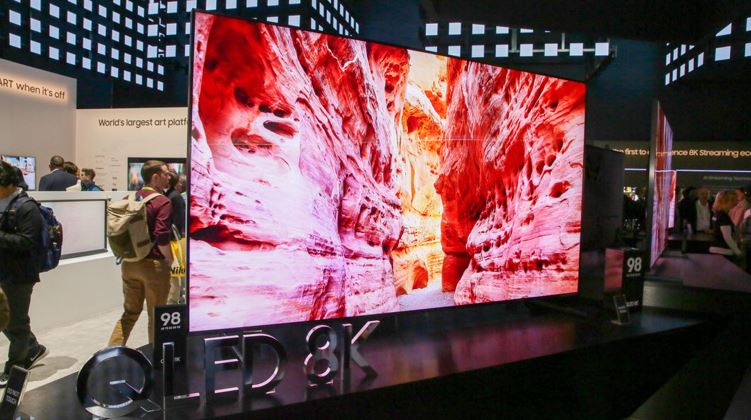 Two rival TV brands use very similar acronyms to describe their best TVs. But QLED and OLED are as different as leopards and lions.

For the last few years Samsung, the most popular TV-maker in the world, has been branding its best TVs “QLED.” Its 2019 QLED lineup is bigger than ever, with seven series encompassing 28 different models. From insane 98-inch 8K behemoths to TVs designed to look like paintings and modern art, QLEDs represent the pinnacle of what Samsung’s formidable engineers can bring to TV buyers.

But it’s not the pinnacle of picture quality. That honor goes to OLED TVs.

Based on the last few years of CNET’s side-by-side comparison reviews, LG’s OLED TVs have all delivered better overall image quality than Samsung QLED TVs. The latest example pitted Samsung’s 2018 Q9 QLED against LG’s 2019 C9 OLED and the LG OLED won handily, delivering the best picture quality I’ve ever tested. In fact the LG B8 from 2018 also beat the Samsung. The Q9 is still an excellent performer, however, and delivers the best non-OLED image I’ve ever tested — but not because of QLED technology.

In June 2019 I reviewed the midrange Q70, which is an excellent performer but no OLED. I haven’t tested any of the highest-end QLED models yet, such as the Q80 and Q90, but if I was a betting man I’d still pick the best OLED to beat the best QLED TV once again this year, even though Samsung seems to have made more improvements than LG. Here’s why.

A QLED TV is just an LCD TV with quantum dots

Let’s start with a quick summary of the two technologies.

The main takeaway is that QLED is closer to regular old LCD than it is to OLED, which I (and most other experts) consider a distinctly different class of television, much like plasma was before it.

Quantum dots are microscopic molecules that, when hit by light, emit their own, differently colored light. In QLED TVs, the dots are contained in a film, and the light that hits them is provided by an LED backlight. That light then travels though a few other layers inside the TV, including a liquid crystal (LCD) layer, to create the picture. The light from the LED source is transmitted through the layers to the screen’s surface, which is why we say it’s “transmissive.”

Samsung has been using quantum dots to augment its LCD TVs since 2015, and debuted the QLED TV branding in 2017. Samsung says those quantum dots have evolved over time — that color and light output have improved, for example. In my experience however, improvements caused by better quantum dots are much less evident than those caused by other image quality factors (see below).

Other TV makers also use quantum dots in LCD TVs, including TCL and Vizio, but don’t call them QLED TVs.

An OLED TV is not an LCD TV at all

LCD is the dominant technology in flat-panel TVs and has been for a long time. It’s cheaper than OLED, especially in larger sizes, and numerous panel makers worldwide, including LG itself, can manufacture it.

OLED is different because it doesn’t use an LED backlight to produce light. Instead, light is produced by millions of individual OLED subpixels. The pixels themselves — tiny dots that compose the image — emit light, which is why it’s called an “emissive” display technology. That difference leads to all kinds of picture quality effects, some of which favor LCD (and QLED), but most of which benefit OLED.

Aside from LG, Sony also sells OLED TVs in the US, while Panasonic and Philips sell them in Europe. All use panels manufactured by LG Display, however.

Based on my reviews, here are some general comparisons I’ve made between the two.

QLED TV picture quality varies more than OLED. Samsung has a bunch of QLED series, and the most expensive perform a lot better than the cheaper ones. That’s mainly because the biggest improvements in the picture quality of Samsung’s sets don’t have much to do with quantum dots. In 2020, TVs like the Q70, Q80 and Q90, they’re the result of better full-array local dimming, bright highlights and better viewing angles, which help them significantly outperform QLED TVs that lack those extras, like the Q60 in 2019.

Meanwhile every OLED TV I’ve reviewed has very similar image quality — all have earned a 10/10 in picture quality in my tests. There is some variation among different OLED TVs, but they’re not nearly as significant as the differences between various QLED TV series.

OLED has better contrast and black level. One of the most important image quality factors is black level, and their emissive nature means OLED TVs can turn unused pixels off completely, for literally infinite contrast. QLED/LCD TVs, even the best ones with the most effective full-array local dimming, let some light through, leading to more washed-out, grayer black levels and blooming around bright sections.

QLED is brighter. The brightest QLED and LCD TVs can get brighter than any OLED model, which is a particular advantage in bright rooms and with HDR content. In my tests, however, OLED TVs can still get plenty bright for most rooms, and their superior contrast still allows them to deliver a better overall HDR image than any QLED/LCD TV I’ve tested.

OLED has better uniformity and viewing angles. With LCD-based displays, different areas of the screen can appear brighter than others all the time, and backlight structure can also be seen in some content. Even the best LCDs also fade, lose contrast and become discolored when seen from seats other than the sweet spot directly in front of the screen. OLED TVs have almost perfectly uniform screens and maintain fidelity from all but the most extreme angles.

Resolution, color, video processing and other image quality factors are basically the same. Most QLED and OLED have the same resolution, 4K, and both can achieve 8K resolution too. Neither technology has major inherent advantage in color or video processing areas. Check out OLED vs. LCD for more details.

QLED can get bigger and smaller (and cheaper)

One big advantage, so to speak, that QLED and LCD have over OLED is the cost of mainstream sizes over 65 inches. Large televisions are the fastest-growing segment of the market and show no signs of slowing down. As I mentioned above, LG’s 77-inch OLED costs $6,500. Meanwhile Samsung’s 75-inch Q70 QLED costs $2,200 and Vizio’s 75-inch P-Series Quantum is even less. Sure, neither one can beat an OLED, but they’re still excellent performers for one-third the price.

In 55- and 65-inch sizes, the highest-end, best-performing QLED models like the Q90 and the 8K resolution Q900A cost more than the cheapest OLED TV. There are numerous other, less-expensive QLED series as well, however, albeit with worse image quality.

What about OLED burn-in?

Burn-in happens when a persistent part of the image onscreen — navigation buttons on a phone, or a channel logo, news ticker or a scoreboard on a TV, for example — remains as a ghostly background no matter what else appears onscreen. All OLED screens can burn-in, and from everything we know, they’re more susceptible than LCD displays, including QLED.

All things considered, however, burn-in shouldn’t be a problem for most people. From all of the evidence we’ve seen, burn-in is typically caused by leaving a single, static image element, like a channel logo, onscreen for a very long time, repeatedly. That’s an issue if you keep Fox News, ESPN or MSNBC onscreen for multiple hours every day and don’t watch enough other programming, for example. But as long as you vary what’s displayed, chances are you’ll never experience burn-in.

Check out OLED screen burn-in: What you need to know for more.

Until I test the best QLED TVs against the LG C9, I won’t know for sure which one wins in 2020, but as I mentioned above, I’d bet on OLED.

For 2019 Samsung has improved its high-end QLED image quality again in an effort to beat OLED, while LG has, aside from a processing bump, mostly stood pat. The C9 wasn’t that much better than its predecessors, and I expect the same for Sony’s new OLED TVs. But given the basic differences between OLED and QLED tech, it would definitely surprise me if those 2019 QLED improvements allowed it to beat OLED overall.

What about 2020 and later? Samsung is actually working on a version of QLED that does use emissive technology, much like OLED and plasma. Known as direct-view quantum dot, it dispenses with the liquid crystal layers and uses quantum dots themselves as the light source.

Emissive QLED TVs have the potential to match the absolute black levels and “infinite” contrast ratio of OLED, with better power efficiency, better color and more. That’s pretty exciting, but it’ll be a few years before we see emissive QLED TVs available for sale. Hopefully by then they’ll think up a new acronym (EQLEDs?).

Before that we’ll get MicroLED. It’s another emissive technology, again spearheaded by Samsung, that seems closer to market than direct-view quantum dot. As you might guess from the name, it uses millions of teeny-tiny LEDs as pixels. MicroLED has the potential for the same perfect black levels as OLED, with no danger of burn-in. It can deliver higher brightness than any current display technology, wide-gamut excellent color and doesn’t suffer the viewing angle and uniformity issues of LCD. It doesn’t involve quantum dots, at least not yet, but who knows what might happen when it comes to market. QDMLED, anyone?

For now, however, OLED rules the picture quality roost over QLED. At least until somebody combines the two.

The ebooks library selection is an impressive one with The Online Publishers “TOP” platform and this hub offers services in multiple languages, more than 60 languages are available for different tasks and services through the platform.