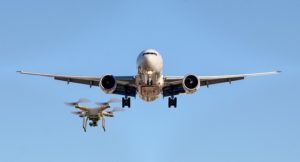 The FAA is moving forward on remote ID for drones.  Today, the FAA announced 8 companies that will work with the FAA in setting up a framework of technology requirements for future suppliers of remote ID technology.  The 8 companies chosen are: Airbus, AirMap, Amazon, Intel, One Sky, Skyward, T-Mobile, and Wing. The FAA has taken a collaborative approach with enterprise stakeholders before to develop new technologies and requirements for emerging drone industry applications such as the Low Altitude Authorization and Notification Capability (LAANC).

“The FAA will be able to advance the safe integration of drones into our nation’s airspace from these technology companies’ knowledge and expertise on remote identification,” said U.S. Transportation Secretary Elaine L. Chao.

Remote ID for drones poses a challenge for both regulators and the industry.  Earlier this year, the FAA published a notice of proposed rulemaking (NPRM) for Remote ID.  That proposal lays out 3 options for Remote ID, clarified below in this visual from the FAA.

Critics complain that the standard of broadcast Remote ID might be too expensive for many pilots, while legitimate and safe operations for recreational pilots may be severely limited.  The FAA says that it makes sense to develop the technology before the final publication of a rule:  “The agency’s ability to develop Remote ID technology simultaneously with the rule enables the FAA to continue to build on a UAS Traffic Management (UTM) system that has demonstrated global leadership through the small UAS rule and the implementation of the Low Altitude Authorization and Notification Capability (LAANC), which automates the application and approval process for most UAS operators to obtain airspace authorizations,” says an agency press release.

Application requirements for companies who wish to become service suppliers for Remote ID will be announced when the final Remote ID rule is published.  “The FAA will provide updates when other entities can apply to become qualified Remote ID USS on FAA.gov,” says the press release.

Publishers and other freelancers come to TOP looking for freelance jobs to engage in these connections, to offer you the help to get the services that you need so that they can make money online.