The COVID-19 Shuffle: How Businesses Embraced Digital Marketing to Survive the Pandemic 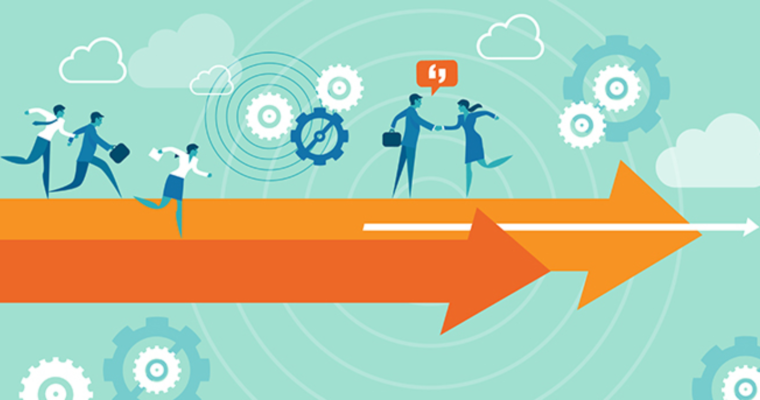 On my first day at the Hilton Hotels Corporation in March 1999, I was handed my employee manual and a copy of “Be My Guest,” the autobiography of the company’s founder, Conrad Hilton.

Hilton Hotels enjoyed its most significant expansion during The Great Depression by leveraging his small collection of hotels in Texas to buy up some of the most luxurious hotels in the United States, including New York’s famous Waldorf-Astoria, for pennies on the dollar.

However, most people don’t know that Conrad Hilton got his start in the hotel business during The Spanish Flu pandemic.

Originally, Hilton came to Cisco, Texas, to buy a small bank; however, that deal fell through.

He decided to stay the night in the run-down Mobley Hotel that was frequented by the workers in the local oil fields.

The hotel, which was running three shifts a day, was mobbed with people waiting for a room.

The current owner called the place a “glorified boarding house” and longed to be rid of the hotel so he could “be out there in the oil fields making real money.”

Hilton, who saw the place as a “cross between a flophouse and a gold mine,” quickly raised the money from friends and family and bought his first hotel at 31 years old.

His changes to the hotel were quick and deliberate.

Seeing “wasted space” throughout the property, he converted the little-used dining hall into 20 new tiny rooms and cut the front desk in half to make room for a newsstand and tobacco shop.

But the real key to his growth during the Spanish Flu pandemic, which raged on until December of 1920, was cleanliness.

Hilton and his staff cleaned the whole hotel from front to back.

Every guest enjoyed a clean room every time, featuring “clean sheets and plenty of soap.”

On these small tweaks that we now consider commonplace, Conrad Hilton built a hotel empire.

While I’ve always found the Hilton origin story inspiring, during the COVID-19 pandemic, I see similar stories of businesses using digital technology and marketing to survive these “interesting times.”

In mid-March, the governor of California issued a sweeping order closing all “non-essential” businesses in the state.

While the news covered the closure of concert venues, sports arenas, and restaurants and bars, closer to home, I saw my local record stores and comic book shops shut down like thousands of other businesses.

Like many of you, in one move, some of my favorite places to hang out closed their doors.

During my darker moments, I wondered if they would ever return; however, I almost immediately saw the creative spark as businesses adapted to new restrictions.

One of the first creative pivots I saw in action here in Los Angeles was at my local, high-end liquor store, Vendome Wine & Spirits in Toluca Lake.

While liquor stores were technically (and thankfully) considered essential, this shop, which caters more to wine and craft beer connoisseurs than a typical, lottery ticket selling corner store, was used to holding almost daily wine and beer tasting events for its clientele.

Suffering from fewer conversions for the same ad spend on your Google Ads?
Your ads might be getting click fraud. Check if you need to protect your ads from competitors & bots. Simple setup. Start your free checkup today.

On my first visit there after the pandemic was in full swing, I noticed a new display of select wines and craft beers, organized by days of the week, along with a sign for “virtual tasting events.”

During checkout, one of the store’s employees explained (behind a plexiglass shield) that when you bought any of those labels, you were given the information for Zoom meetings where you would remotely get your tasting notes with your fellow amateur sommeliers.

While I wasn’t a regular at the usual tasting events, which used to host up to 28 people six days a week, I immediately went back for a bottle to support their efforts.

I asked if Milligan had plans to continue the virtual tastings after pandemic restrictions relax.

“We’re a pretty close-knit group, more of a family,” he said with a smile, “But we might keep the virtuals going, you never know. Give the people what they want, that’s what I say.”

Soon after, I started receiving emails from my local comic book shop in North Hollywood, Collector’s Paradise, which opened in 2019 (they also have locations in Winnetka and Pasadena).

I’ve always loved the team at the store because they’re actual comic book readers who can make real recommendations and discuss titles I may not have read yet, something you can’t get shopping for comics on Amazon.

I’ve run into the owner of all three locations, Edward Greenberg, more than a few times over the years, so I reached out to see how they were doing.

“Our business is comics, which is a periodical, which means we rely on customer visits,” Greenberg answered.

All three stores shut down as soon as the order for Los Angeles, and Los Angeles County came down.

“Many of our customers subscribe to comics through our stores and pick them up weekly or monthly. We are a business of a lot of small transactions, which means we rely on weekly customer visits throughout the week,” he continued, “Now that’s gone.”

However, Collector’s Paradise, which opened their first location in 1994 and has weathered multiple economic downturns, wasn’t ready to go quietly.

The store used email and social media to alert its customer base that they would start mailing out customer’s “pull lists” by mail plus started offering “personal shopping” for those stuck at home (I know I added a few trade paperbacks to help me ride out the storm).

Then, to add insult to injury, comic shops were notified that regular shipments of new titles were going to dry up in April.

Greenberg worked with his team to come up with new ways to keep revenue at a level that allowed him to keep paying his employees as well as rent.

They came up with “CURATED,” a curated collection of DC, Marvel, or “Indie” comics and graphic novels that customers could subscribe to with 1, 3, and 6 months deals.

The store also upped its advertising spend on social media and other platforms and started creating more content and expanded their eBay listings.

“CURATED was a giant winner for us,” Greenberg told me. “It will definitely be a long-term product way past this crisis.”

Over in Hollywood, one of my favorite record shops, The Record Parlor, began its COVID-19 transformation.

Soon after the shutdown, I started receiving emails and targeted ads on Facebook, letting me know that they were still alive and ready to feed my vinyl habit.

The store was already active on eBay and Discogs, added personal shopping and curbside pickup, along with (and this was my favorite) delivery by Postmates during weekends.

On various social media platforms, they have stepped up their presence by highlighting their many themed specials featuring their mascot, Benny the Bag; however, they miss seeing their customers.

“I remember thinking making money online selling vinyl was really cool until we opened The Record Parlor,” read one post, “We love the interaction with customers.”

Their eBay listings went stale, and their site looked like it hadn’t seen a redesign since people were still on dial-up.

The Shutdown Has Affected More Than Retail & Restaurants

I have the pleasure of working with a variety of types of businesses at my agency, Amplitude Digital.

Several of them have had to adapt quickly to a COVID-19 existence, including Be Aveda Institutes, a network of five beauty schools in Florida.

When their retail and guest services operations on March 14, our team worked with them to rewrite their Google Ads copy to reflect they were still virtually and expanded their keyword sets to include distance and remote learning.

“Before the pandemic, less than 5% of all admissions tours were conducted remotely,” Be Aveda’s president, Jim Petrillo, told me via a recent video call. “Now, it’s 100%.”

While the pandemic has forced them to embrace some new digital technologies with great success, it wasn’t an entirely smooth start.

“Initially, the pandemic impact on our future student pipeline looked bleak,” Petrillo continued. “But we stuck it out, and it started to come back each week.”

The network of schools was able to get their enrollments near pre-pandemic levels and successfully started an entirely new class in all locations using a wholly virtual platform.

“We have learned that people are very adaptable,” Petrillo continued. “Going forward, our ‘new normal’ will include virtual platforms while we wait for state and local governments to re-open our clinic floors and conduct class in person again.”

Back in Los Angeles, Hedley & Bennett, a leading culinary brand that has outfitted thousands of restaurants, hotels, resorts, cafes, bars, and, recently, the cast of Top Chef, suddenly found itself without one of its key revenue streams.

Over the past few years, H&B had parleyed this rabid following into the D2C market; however, this strategy needed to expand until restaurants re-opened.

Hedley & Bennett, which was already working with my agency for paid search advertising, immediately started looking at other digital marketing channels to expand their reach.

“Digital has been at the forefront in getting our messaging out,” says Jon Levine, H&B’s CMO, “both for marketing purposes, but also for sharing information to our current clients.”

The company, which also pivoted its production line to include masks for both restaurants and the home market, expanded its search and social media presence.

Their team used Instagram Live to communicate information on the masks and customer service questions and started interviewing celebrity chefs and restauranteurs on how the pandemic was affecting their business.

The effort paid off: In addition to donating over 200,000 “Wake Up & Fight” masks to first responders via their “buy one, give one” promotion, they acquired a significant number of new customers.

“There are still a lot of unknowns,” David continued, “But the increased in-home cooking is not going away anytime soon, and we have an opportunity to expand our product line to further this.”

Entrepreneurship Is About Solving Problems

One of my favorite recent movie quotes is from “The Martian”.

After being marooned and rescued on Mars for 560 sols, Mark Watney (Matt Damon) becomes a survival instructor for astronaut candidates.

“At some point, everything’s going to go south, and you’re going to say, this is it. This is how I end. Now you can either accept that, or you can get to work. That’s all it is. You just begin. You do the math. You solve one problem… and you solve the next one… and then the next. And If you solve enough problems, you get to come home.”

Sure, we’re not trying to survive being stranded on another planet, but on its best days, being an entrepreneur is about solving problems.

Hopefully, these examples of how these companies have solved their company’s problems during this terrible pandemic will inspire you to use digital marketing to create your COVID-19 shuffle.

“Social Media is about sociology and psychology more than technology.” – Brian Solis. Visit The Online Publishers TOP online publishers.3 Ways To Get Success With Freelance Jobs On TOP.